Research released by Southern Cross and BusinessNZ has revealed the latest picture of health and wellness in the New Zealand workplace.

It is the fourth time the biennial survey (previously named Wellness in the Workplace) has been carried out. It canvassed 99 private and public sector businesses representing more than 121,000 employees, or 6.21 per cent of New Zealand’s workforce – the largest number since the survey began in 2013.

BusinessNZ chief executive Kirk Hope says the report shows the cost of absenteeism for business and the economy is significant but there are some positive indicators. “Thirty-five per cent of staff are likely to turn up to work despite being sick, down from 49 per cent in 2012. This major drop shows workplace culture is shifting.

The direct cost of absenteeism is between $600 and $1,000 per person a year, and while this is a substantial cost, New Zealand businesses need to recognise the importance of creating a culture where people feel they can stay at home when they are unwell.”

At the same time, more employers are investing in wellbeing benefits to maximise their employees’ health, at work and outside work, is maximised. Total investment in staff wellbeing by New Zealand businesses was an estimated $2.37bn in 2018.

“The average investment employers make in a worker’s health is just over $1500 a year.2 At Southern Cross, we’ve seen a substantial benefit to productivity by investing in the wellbeing of our employees.”

This year’s report also showed a net 23.5 per cent of those surveyed reported increases in employee stress and anxiety levels compared with 22.9 per cent in 2016.

In 2018, 63.3 per cent of businesses with more than 50 staff provided training for managers to identify and manage stress in the workplace, compared with only 37.3 per cent in 2014.

Astwick says the 2019 Workplace Wellness Report will enable businesses to better understand their workforce holistically across physical, mental and social drivers of health.

“Because we spend about 19,000 hours a year at work, it’s important to both invest in our people’s wellbeing and create cultures where sick days are acceptable. It’s the right thing to do for businesses and for staff. A culture of health leads to a healthy culture,” he says. 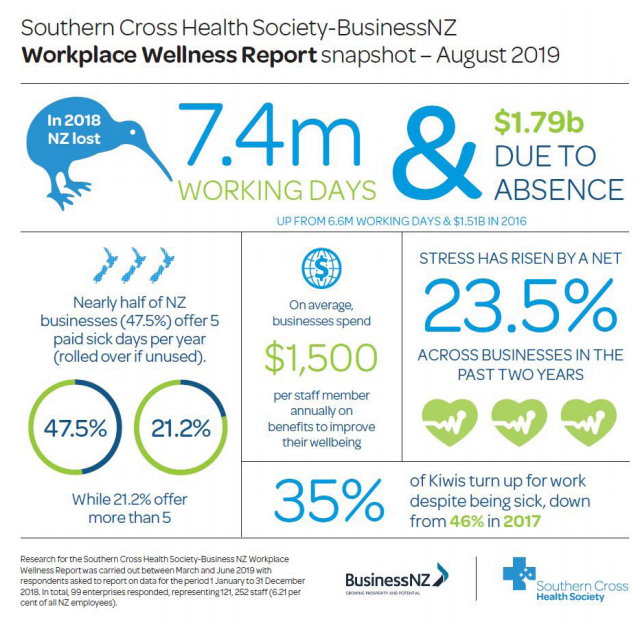 The big picture of workplace health:

You can read the full report here.